The Harlem-born actress, beloved for roles in “The Sopranos” and “A Bronx Tale,” is bringing characters to life in her painting studio.

“I feel like when I’m painting, once I start adding eyes, nose, and mouth, it’s the weirdest thing that happens to me,” the actress Kathrine Narducci, who has also been painting for decades, says. “As soon as I give them one eye or one nose or a mouth, whatever I put first, I almost feel like they are alive in my studio, and then I start talking to them. I say, ‘Don’t worry, you’re going to get another eye. Don’t worry, I’m going to make you beautiful. Don’t worry, you’re going to get a nose. You’ll be able to breathe now.’”

The iconic New Yorker and East Harlem-born actress—beloved for roles in A Bronx Tale, The Irishman, and most famously, as Charmaine Bucco in The Sopranos—has been making a lot of art these days. Actually, she’s always been making art, but as she told me over the phone last fall, “It’s a pandemic. I’m fucking going crazy. I’m painting like crazy.” From her home studio in the Bronx, she’s been posting about her process on Instagram, highlighting her expressionist portraits—often abstract nudes, rendered in bold color—and documenting her practice. She’s had several shows showing her work over the years, including a solo exhibition during the City Island Art Walk in New York last October. And like any great character actor, the figures she creates tend to take on lives on their own.

“There was one time I painted all these women, it was called The Gathering,” she says. When she put the canvases up on separate walls around her studio, just to get a look at them, “I felt like one was getting jealous of the other, like, ‘You gave her better boobs than me.’ I was like, ‘Alright, don’t worry. I’ll fix you.’ They become alive. They become alive like Frankenstein.”

In the fall, Narducci was finally able to go back to work on the Epix series Godfather of Harlem, reprising her role as mob-boss wife Olympia Gigante, and has a few more exciting projects in the works. Being back on set has, naturally, been a little weird, with everything and everyone “separated, Plexiglass, each actor gets their own brushes and hair. It’s a lot,” she says. “It’s very safe, very controlled, but it’s a different feeling when you’re making art. When you’re making art and you’ve got to be controlled, there’s something to me that’s going to be very—I don’t know. I don’t even know how to put it into words.” Freedom of expression, and free association between mediums, feels vital.

Narducci grew up drawing and watching movies, and she idolized her mother Bunny, who, at home, got to be a poet, a singer, an actress. They would reenact scenes together, becoming Ann-Margret in Bye-Bye Birdie or Judy Garland in A Star is Born. She even bought her first canvas the same year she began acting professionally: 1992, which is when she filmed A Bronx Tale, directed by Robert De Niro. (She got the part when, after bringing her then-nine-year-old son to an open call to play De Niro’s son in the movie, she realized they were also casting for the role of his wife and asked to audition.) The first thing she ever painted was a figure against a dark sky, lassoing the moon. It was inspired by one of her favorite movies, It’s A Wonderful Life.

“Did you ever see that? With Jimmy Stewart?” she asks me. “And he’s saying, ‘What do you want, Mary? What do you want? You want the moon? I’ll take a lasso and I’ll get you the moon.’ He’s trying to convince her to love him.” Might lassoing the moon have also felt a bit like capturing a dream, like scoring a role in a De Niro movie? “Well,” she says, “the metaphor to that movie, and that painting, is you can get anything you want.” 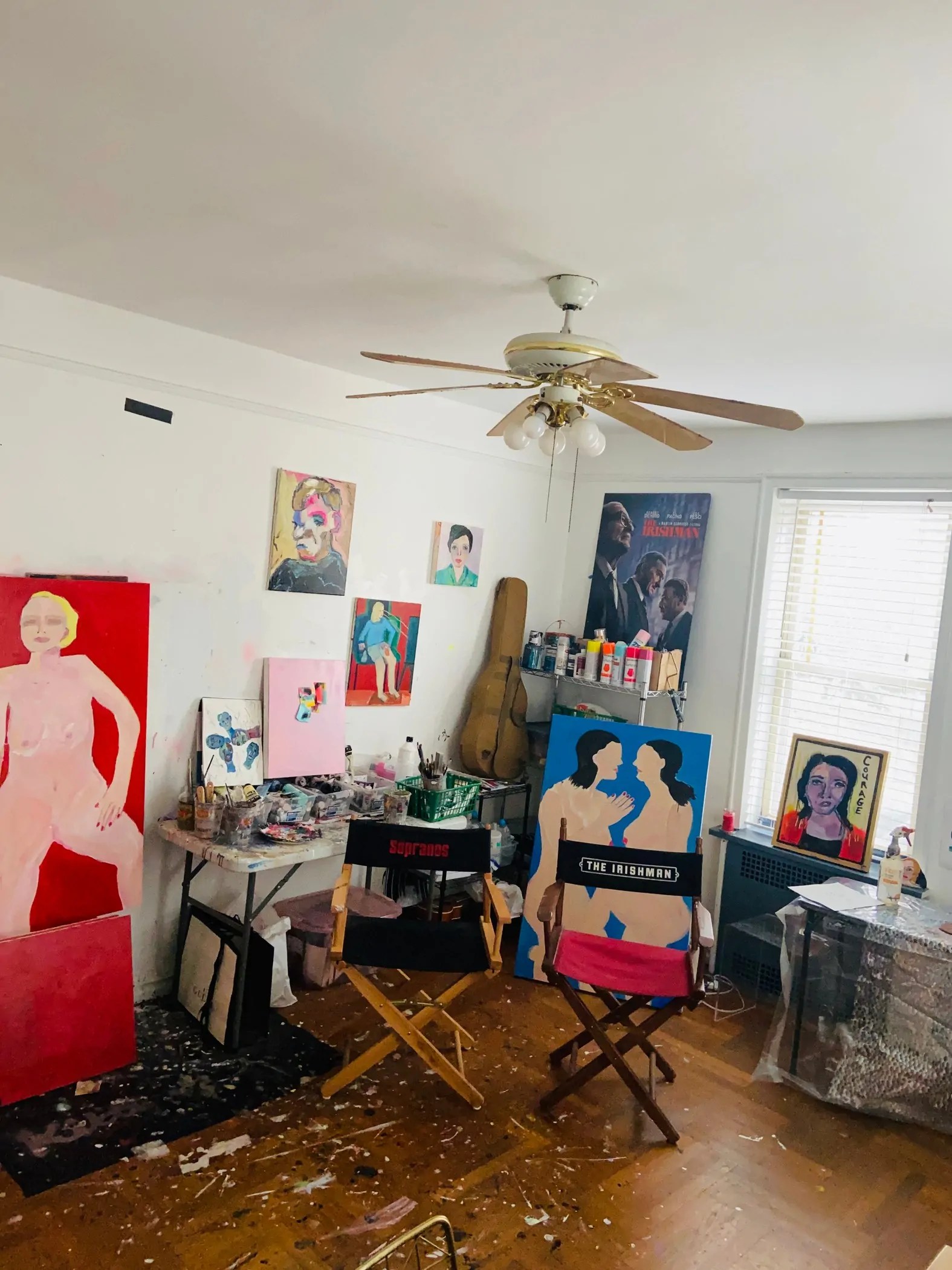 I ask why she gravitates towards painting nudes. “There’s something about doing a nude and giving it an imperfect body,” she says. While there is an element of the discourse against body dysmorphia taking place on Instagram, which is where most people see her art, she also recalls a day when her niece came by her studio, and marveled at the abstract bodies in Narducci’s paintings. Her niece told her, “‘Oh my God, the paintings are so beautiful. She’s so beautiful.’ And this was a painting that was so disproportioned, like a big foot, a big tit, a little tit, one eye high, one eye low. And I said, ‘If you think they’re beautiful when you look at these women, why do you filter the shit out of your portraits when you put them on Instagram? Why don’t you think you’re beautiful?’”

As in her art, Narducci often comes up inner lives for her characters. On an episode of her Sopranos co-stars Michael Imperioli and Steve Schirripa’s podcast “Talking Sopranos,” she said that in order to ground herself in the character of Charmaine—wife of Artie and perhaps the show’s only character to consistently take no shit from Tony Soprano—she needed to come up with a reason for why Charmaine couldn’t stand Tony and why Artie still loved her. (While people have gotten really into rewatching The Sopranos during quarantine, a handful of other Sopranos alums have gotten into podcasting; last year Narducci also made appearances on “Pajama Pants” with Robert Iler and Jamie-Lynn Sigler, ‎and “Fuhgeddaboudit” with Vinny Pastore.) “You have to have something going on when you step in front of a camera,” she tells me. “I always give myself a backstory and an inner life, always. It would be so boring if I didn’t. What’s the enjoyment?”

Does she think any of her characters would have made art? (Imagine… Charmaine painting portraits à la Tony Soprano and Pie-O-My?) In her mind, Godfather of Harlem’s Olympia, a 1950s Italian-American housewife married to a mob boss, likes to paint classical portraits when nobody’s home. “To make her a little more interesting I said, ‘Well, what did she do before she met Vincent, and what is it that she wants to do that she can’t do because it’s 1956?’” While none of this is actually written into the script, the story helps her bring the character to life: “That’s what you got to do. You think about it, and then you let it go,” she tells me. “Estelle Parsons in the Actors Studio says, ‘You do all your work at home, and once you get on stage and you start doing the play, you throw it all out the window—but it’s still there.’” They become alive like Frankenstein.

At the end of our call, in the spirit of still being in the midst of quarantine, she envisions an imaginary salon gathering of her artistic muses, of the canvas and the screen: Pablo Picasso is there. So is the Golden Age-era Italian actress Anna Magnani—star of Narducci’s favorite movie, Wild Is the Wind (“a lot of people don’t know Anna Magnani, but she’s my fucking idol”)—and the legendary Shirley MacLaine.

“We’re in Paris, in Picasso’s studio,” she says, spinning the idea in her head. “Picasso is teaching me— [No,] not teaching me. He’s letting me be free and collaborate on a piece of canvas with him.” Magnani and MacLaine are posing for their collaborative painting. A record spins in the background: Edith Piaf singing “La Vie En Rose.”

“And,” she imagines, “we’re drinking the most fabulous wine.”