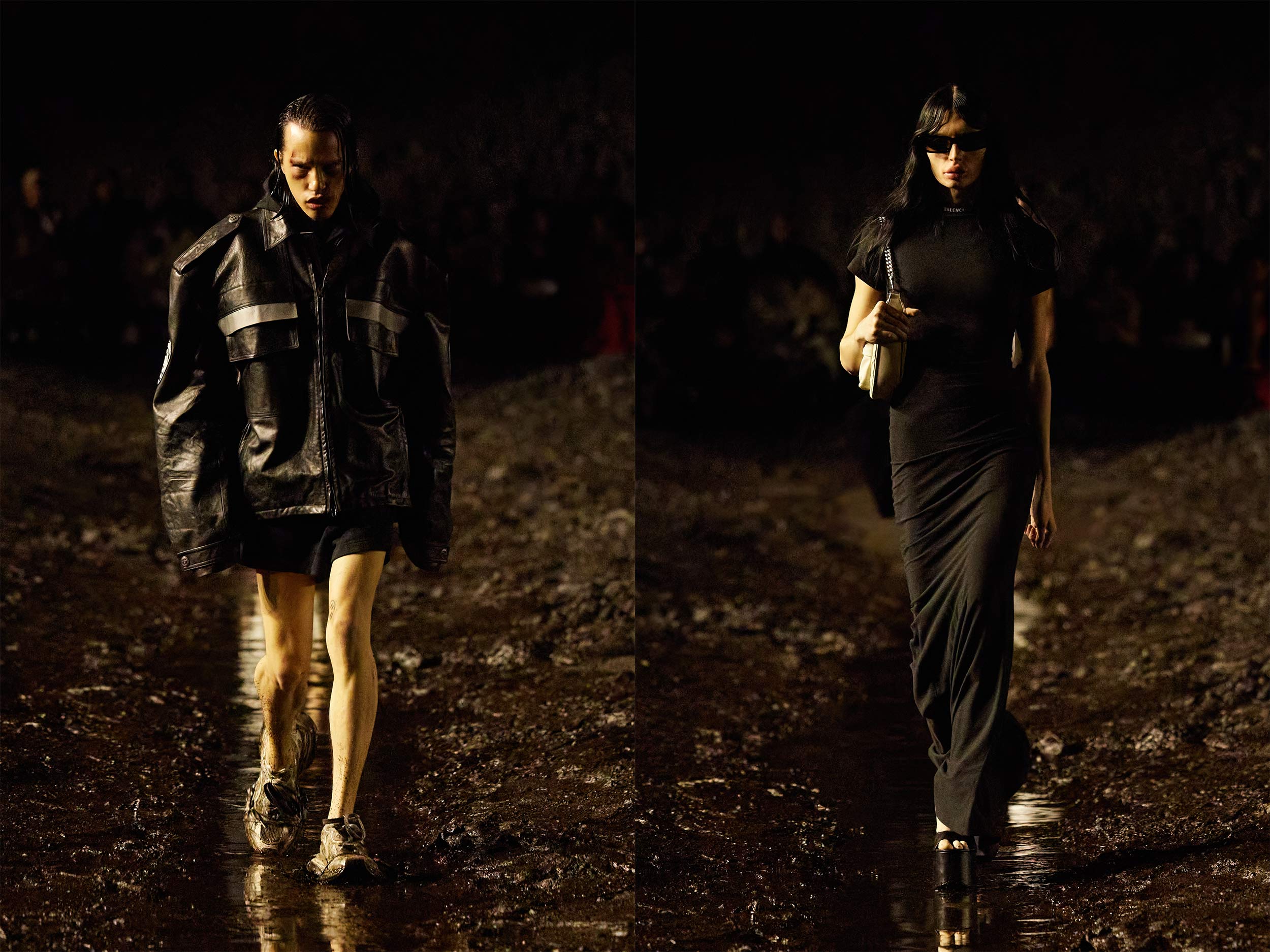 “The more you try to be yourself, the more you get punched in your face,” read Balenciaga’s Paris Fashion Week show notes. And who better to illustrate this point than Kanye West?

The musician-turned-designer was the opener for Demna’s Spring/Summer 2023 presentation, stomping down the mud-drenched runway (275 meters of black peat, sourced from a French bog) in a cargo security jacket and leather biker pants. He bit down on a logo mouthguard, bruised up as though he’d been in a fight. “[The make-up] took longer than making someone look pretty,” Demna explained post-show—a concept that applied to the collection at large. There were garments far past the precedent set by the label “distressed”: They were ripped up, graffitied, fake-aged, and positively covered in grime.

A couple of months ago, West gave an interview to Fox News, defending the sale of his Yeezy collection out of construction bags. Customers had to dig to find what they wanted. His approach was intended to make shopping more egalitarian, he explained, and to “bring the best design to the people.” In a now-deleted tweet, he cited a couple of inspirations: “the children,” and “the homeless.” “Look, man. I’m an innovator,” West said. “That’s exactly what the media tries to do. Make us apologize for any idea that doesn’t fall under exactly the way they want us to think.” 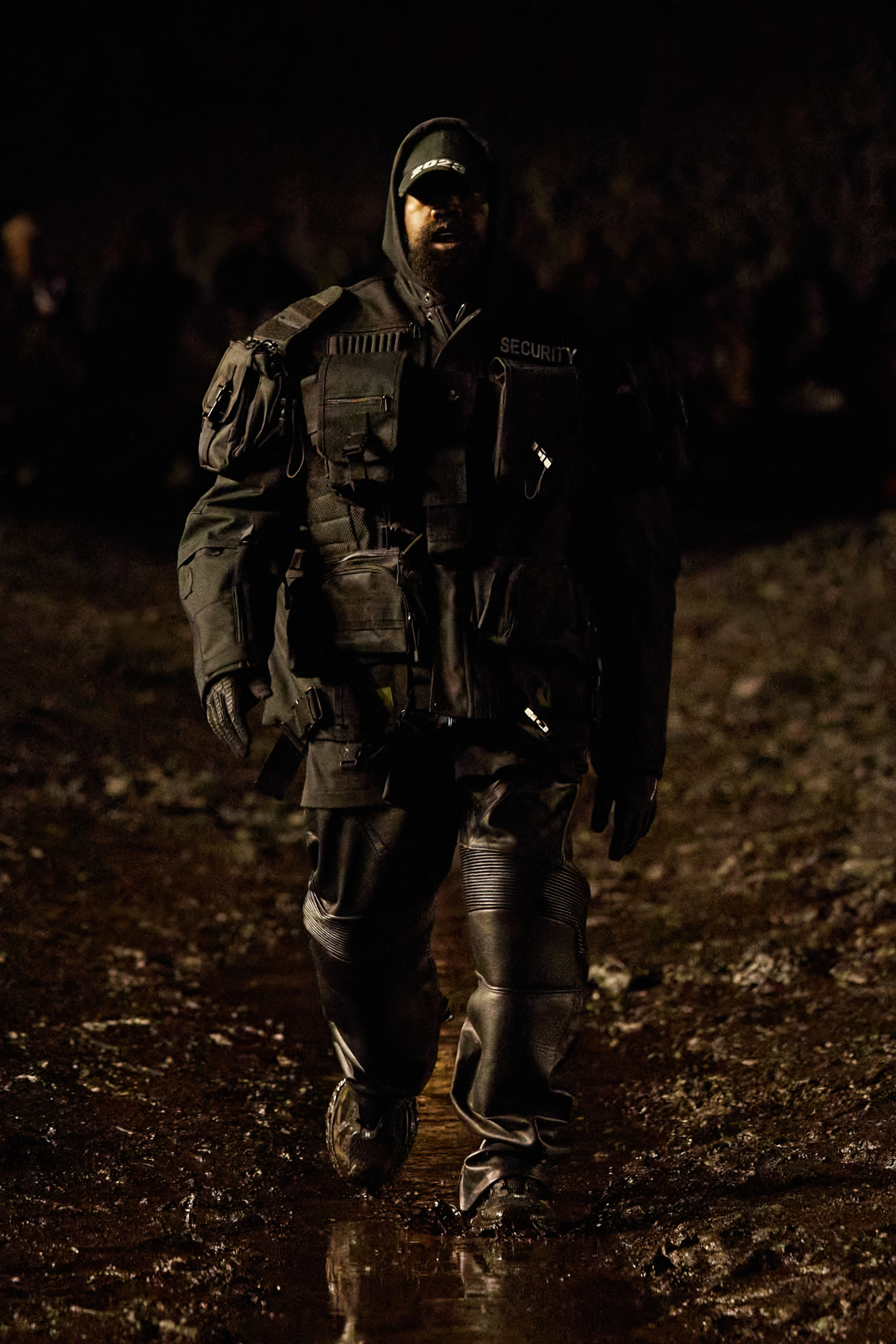 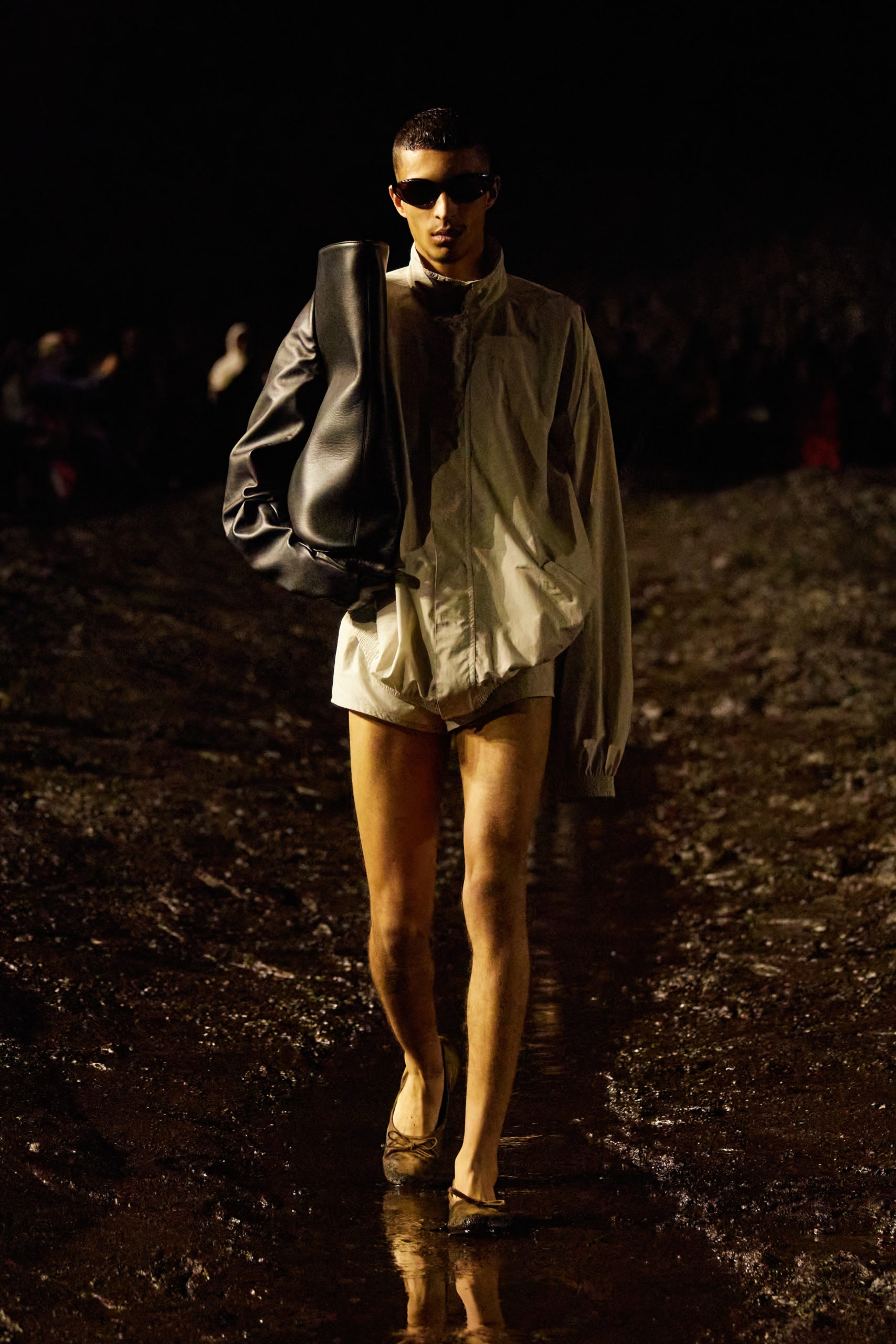 It’s the sort of comment that renders Balenciaga’s show controversial by association; Demna and West are forging parallel paths. They’re compelled to subvert the rules of fashion, defiling its most sacred spaces: the retail store, and now the runway. On top of that, they’re fiercely dedicated to the search for and protection of their own creative identities—hence Balenciaga’s lost wallet show invitation. Demna and West are aware that they’re living in a compromised, dirty world, and they’re trying desperately to make it known to everyone else.

“Naturally I’m an optimist,” Demna said, “but I cannot be very optimistic right now.” His Fall/Winter 2022 show saw models battling artificial snow and wind; originally cast as a commentary on climate change, it gained new meaning in the context of the developing war in Ukraine. It’s common knowledge that Demna has a personal understanding of state conflict, having fled Georgia as a 10-year-old boy. And this season, the references to it were deliberate: the insinuation of violence, the tactical gear, the trenches and appeals to marred childhood—muddied stuffed animals, and baby slings carrying lifelike dolls. Despite his own experiences (which helped Demna to appear less tone-deaf than West, at least, regarding homelessness), co-opting the struggles of the masses is always complicated in the context of the fashion world, because it’s a world underpinned by luxury. What business do the rich have in taking aesthetics associated with the most vulnerable? 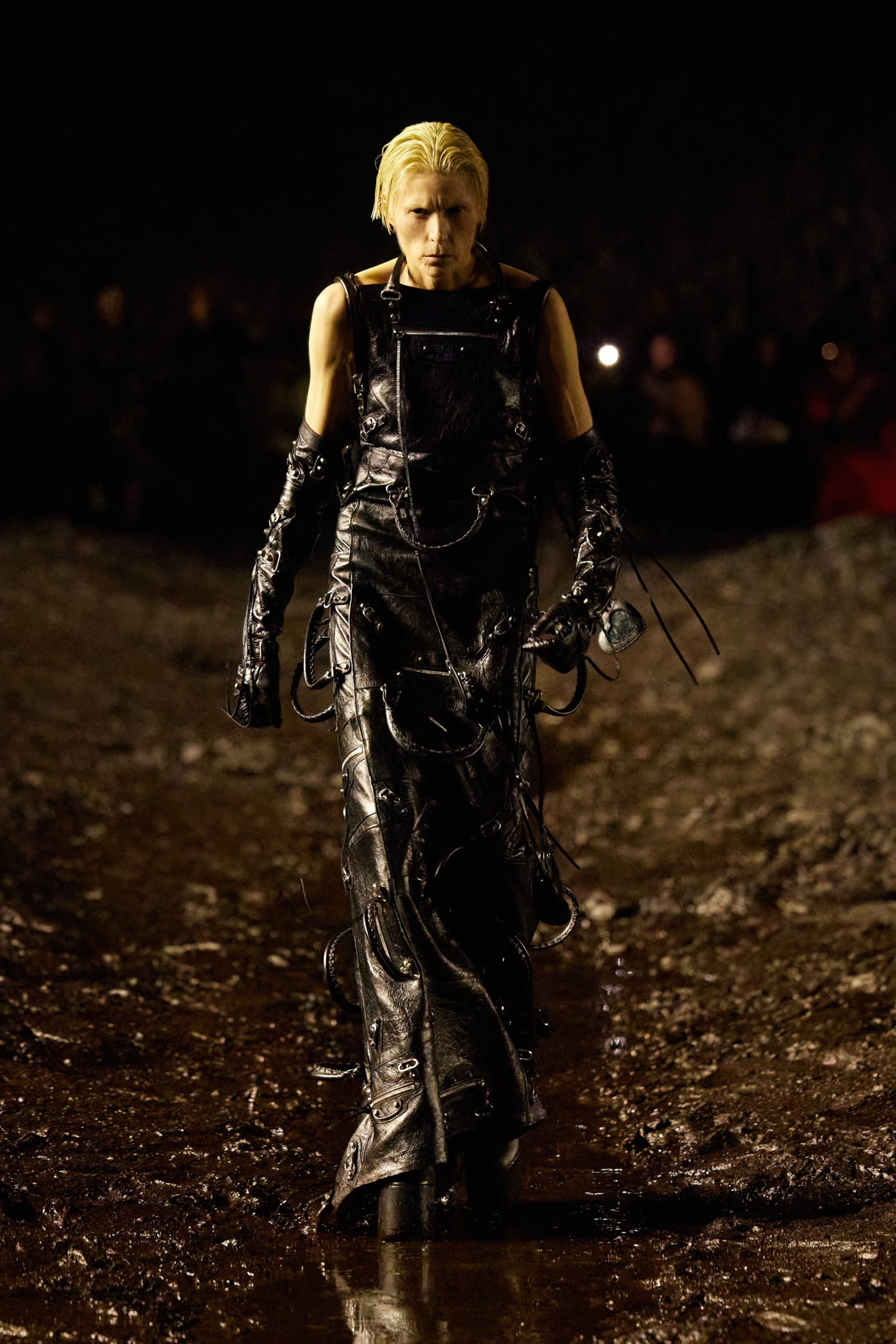 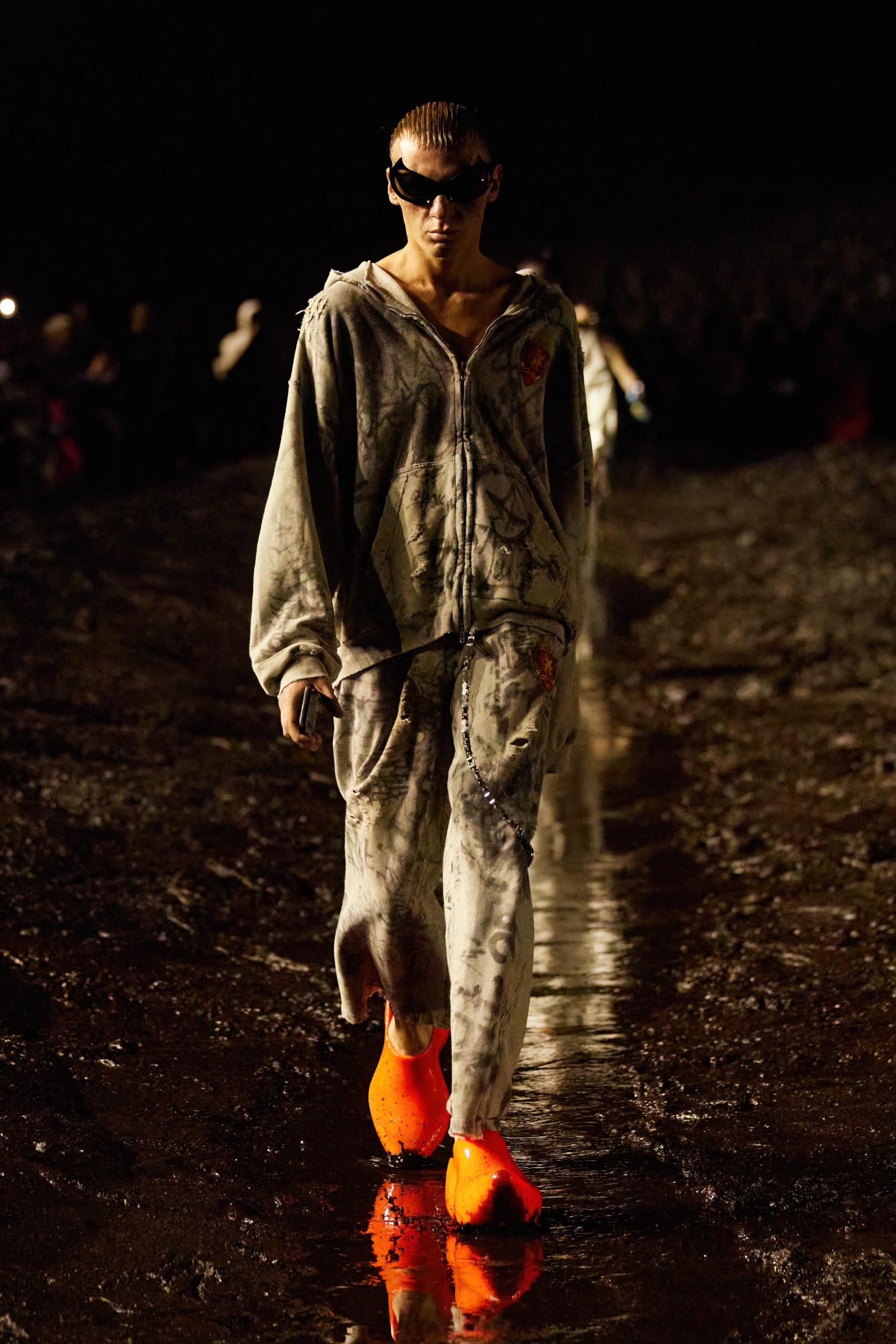 On Twitter, discourse centered around a couple of threads: First, that Balenciaga is a “social experiment,” an “in-joke” for the fashion crowd; and then, the price we’re willing to pay to be a part of it. The label’s trash bag pouch—listed for £1,290, designed to look like garbage—came up time and time again. We want badly to see Demna’s work as a gimmick, as a money-making scheme. Same with Kanye: pop culture’s reigning king of the genius-or-troll debate. But their bodies of work can just as easily be seen as art—the price, just another component of the message.

“You have to stand up and continue walking,” said Demna. “[It’s the] crusade of discovering who you are and defending that.”

Like it or not, the show opened up a conversation worth having. Society needs provocateurs in order to progress—regardless of the direction we choose to go in. Demna and West are happy to oblige.